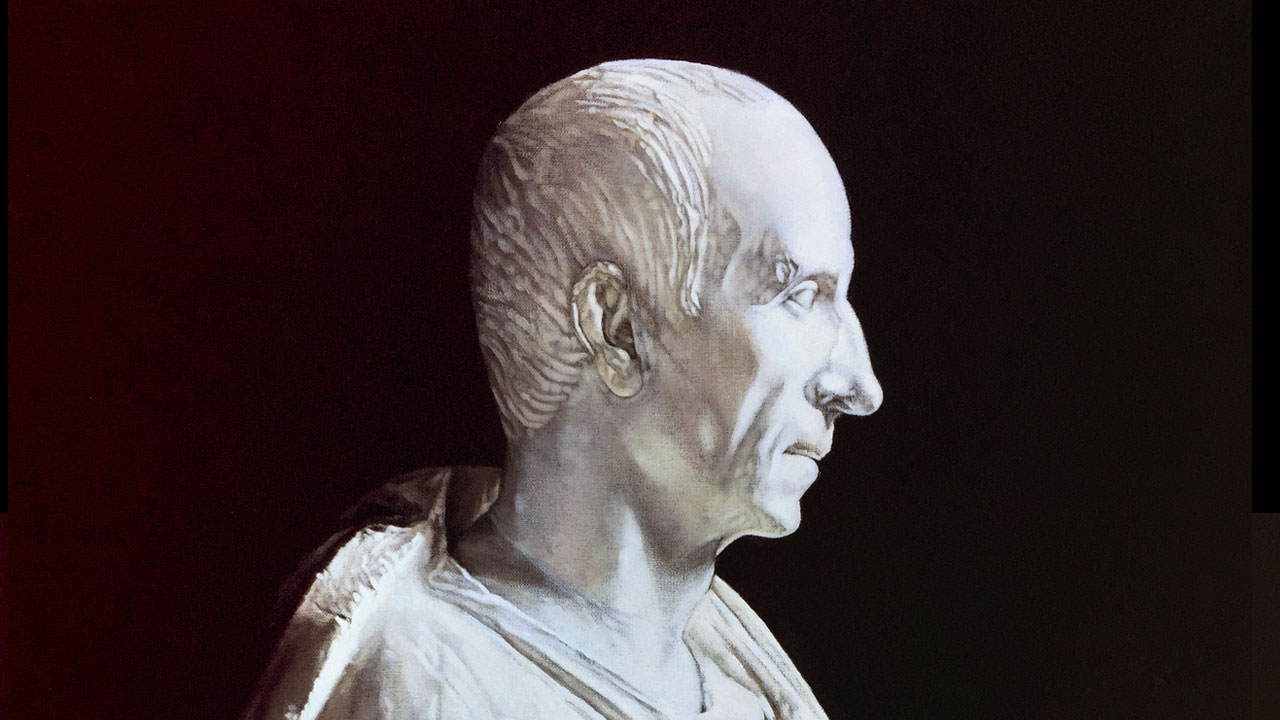 The original sculpture is an anonymous first century BC, Brutus Barberini. It is an exempt sculpture belonging to the funerary portrait genus. The late poses with heads of his ancestors; togato portrait with robe and white marble, referencing the high status of the deceased; It is a sculpture of a private nature, and we can see an evolution of the republican portrait because each head belongs to different eras.

The figure conveys the pride of a roman patrician before the importance of his lineage, represented by realistic portraits of his relatives, who confirm him in that sense of superiority, symbol of their social importance and their own privileges as roman patricians. Among the roman patricians it was usual to be portrayed with busts of ancestors. Kenneth e. Silver reflects in an essay upon returning to the past to move forward: “The worship of ancestors allows human, fragile and fleeting creatures, you feel connected to something greater and less ephemeral than they really are. This is true in the arts as much as any other field. “

I like my work do evolve the starting point whether it is known or not. Don Quixote has always been imposed in every age, since its inception, from its contemporary readers, and one thing that makes it fascinating is its ability to reach contemporary readers, despite of being a parody book of the books of chivalry, although current readers ignores that which is parodied. In this case the solemnity and the righteousness of the portrait remains, and the mixture of styles in the portraits: a complete marble human figure holding two marble heads, which incidentally gives paternalism to the central figure, exerting it on the other two. It is a presence and two references to other two presences, two ancestors, but without knowing all this, the solution works almost upside down. Brutus pose Barberini is protective, the position is that could have a parent with two children; ancestors seem childish by the evolution of style; probably they were younger at the time of being portrayed, that circumstance seems to me that is present. The original sculpture has a predominant central vision, however the profile view brings more nuances that enhance these contrasts, establishing a closer relationship between the figures.

I have not worked with volume but with light; Light is emerging from the darkness. Both this and the “White Horse” picture I develop a dramatic treatment in which figures rise from the dark with some violence, with a tone of urgency. In both paintings there are two parts with a different treatment, the figure and the black background as a field of texture and color on the one hand, and the flax as something above. The boundaries between them are important as well as the physical limits of the canvas. In the case of the horse, the lower part plays with the gravitational field of the canvas, suspending the horse. In both there is a change in density between black and linen, but in this case, in the Barberini Brutus painting, is also a cut to the form and a frequency change; the effect is the step of an image based on a figurative representation to an image based on abstract codes, replacing the base which supports the tension of the form image. In the figurative part there is a volume modeled by a light source; in linen part there are no volume neither light nor forms, it’s a field of texture and pigment prior to color. The painting works by contrasts.